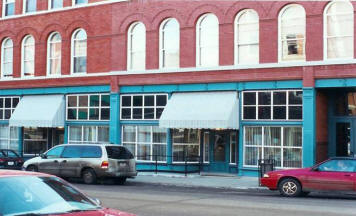 BPRC, with 160-bed capacity, is designed to assist adult male offenders with their transition back into the community as well as to provide a cost-effective, program-intensive alternative to incarceration. BPRC provides residents with a full-range of correctional programming, chemical dependency treatment, life skills development, and employment skills.

The program goals of the BPRC are as follows:

Community, Counseling and Correctional Services is a company, through diversity, that continues to change lives, one-life-at-a-time, by providing services and programs to the persons in need.

The BPRC is designed to serve the following types of adult male offenders:

The BPRC is NOT designed to serve the following types of adult male offenders:

Accepting responsibility and ownership for the cost of incarceration and correctional programming is an important part of the CCCS program philosophy. Therefore, residents are expected to contribute to the cost of their participation in BPRC. A daily charge of $14 for each day or $98 per week will be charged to all residents referred by components of the Montana criminal justice and correctional systems. Federal residents will be expected to pay 25% of their weekly gross income. Inability to pay for services will not preclude offenders from participating in the BPRC program. Indigent residents (those in arrears $360 or more) may apply to have room and board waived.

A dedicated team of staff distinguished by both education and experience provide services at BPRC. CCCS has carefully selected a diverse, professional staff to ensure that residents receive the most effective environment for correctional programming and community transitional services.

CCCS considers public safety paramount and places a premium on security. As such, CCCS has implemented a strict security program for the BPRC. This program includes a secure facility and complementary security functions — hourly counts, physical checks, urinalysis screening, etc. — to hold all offenders accountable and preserve a safe, secure environment for staff, visitors, and the general public. These are the following:

Referrals to BPRC are only made by the Montana Department of Corrections or the Federal Probation System. Once a referral is received, the CCCS staff and local screening committee will review the appropriate paperwork (usually within one week of receipt) and determine the applicant's suitability for the program.

This screening committee is composed of six members, including: 1) the Program Administrator for the BPRC/WTC; 2) an at-large Community Representative; 3) a local Parole & Probation Officer representative; 4) two members of CCCS' Board of Directors (one sitting in the capacity as an "alternate"); and 5) the Sheriff (or designee) of Butte-Silver bow county. A majority approval vote of the Local Screening committee members is required and assures the offender applicant is eligible for placement in either the BPRC or WTC.